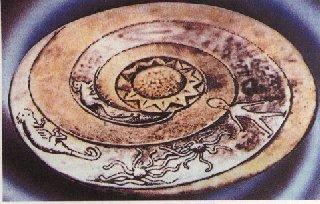 It seems that Egypt is not the only place that has been visited by Aliens in ancient times. This plate called 'The Lolladoff plate' is a 12,000 year old stone dish found in Nepal. It clearly shows a disk shaped UFO (top of pic, hard to see from the angle of the plate however). There is also a figure on the disc looking remarkably similar to a Grey. Notice the spiral galaxy shape as well, with the alien inside it and the ufo at the begging of it. Galaxies come in spiral shape and through out India, Egypt and Peru and other ancient sites the spiral shape is very often seen. This galaxy spiral is probably there to tell us that they flew here from another galaxy, or the spiral shape could signify energy or eternity, other meanings attributed to the spiral by Egyptians and other ancient cultures with inexplicable advanced methods in astronomy and spirituality. 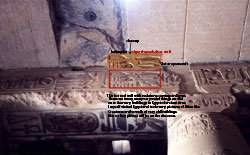 The hieroglyphics to the left are taken from an Egyptian tomb. Note the craft on the right that looks like a flying saucer or modern jet aircraft, the picture on the left resembles a helicopter with astonishing likeness, surprising since this artwork is more than 5,000 years old. How did these pictures end up there? Easy these crafts no doubt existed back then, a statue of a small craft resembling a modern day aircraft was also found in Egypt. It is in a museum today, when analyzed it showed symetry in the design of the statue signalling knowledge of flight way back in Egypt. Forget the Wright Brothers, the Egyptian brothers were way before them. Some people think I am naive for believing in this stuff. The reason why they think that is because modern society has taught them that believing in this sort of thing is a sign of being naive or a little thick. But after reviewing the evidence in this case, and several ufo and alien documented cases any intelligent judge would rule in favor of alien existance as crazy as that may sound. In any other case with so much evidence the ruling would be clear, but in this case, the judges are impartial unfortunately. 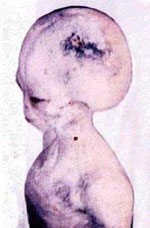 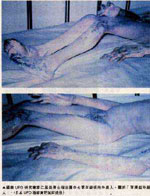 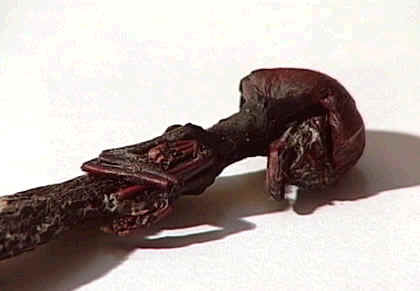 On October first of 2002, while vacationing in the Southern Chilean city of Concepcion, a group of family members found what appeared to be a small humanoid creature. The miniscule being measures about 7.2 centimeters long. It has a relatively large head, two arms with long fingers, and two legs. The discovery was first reported by "Mega News Service", which is the local news channel in the Santiago area.

According to previously gathered evidence and interviews conducted by journalist Rodrigo Ugarte, the bizarre creature was found among bushes by one of the children during an outdoors trip. The child allegedly picked it up and wrapped it with a piece of paper. The child claims that it stayed alive for about eight days, and in some instances, it even opened its eyes.

Nevertheless, after supposedly being dead for a few days, the small creature displays signs of advanced decomposition; it even appears to be in a strange state of mummification.

Specialists from the University of Chile pointed out to a possibility that it might be a fetus from local wild life, such as a wild cat. However, they have not reached a conclusion to determine the exact species the supposed fetus could be scientifically associated with. They expect to carry out DNA testing in order to come up with a conclusion.

Ancient Australian rock paintings of "Vondjina", the mouthless god of creation... All over the world, ancient drawings of beings with large, round heads have been discovered often with lines radiating from them. Were these helmets of some type? Obviously you can see that they look like the now-famous "grey aliens" that so many people have claimed to have witnessed around the world. The alien bodies seen at the Roswell ufo crash were said to have looked like the grey aliens as well. Why would it be so out of the ordinary for them to exist? Evidence is everywhere, reality is right in our face, and we keep turning away. Atleast those who we want to listen are turning away. But they are no more naive than I possibly, maybe they know that they exist... And the only reason they keep acting like it is a foolish idea is to encourage people to abondon the thought of ufo's life elsewhere than on Earth. 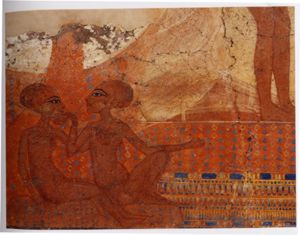 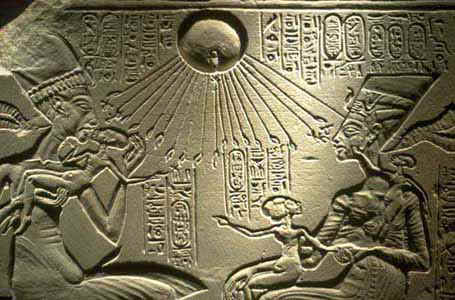 Here are some Aborigine paintings that look like aliens.

Look at the eyes and most importantly the head of the egyptian or "alien" below. 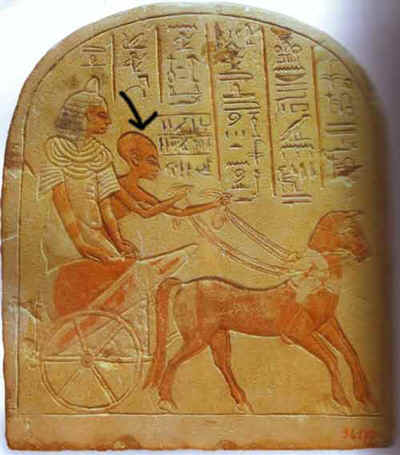